Squid Game: a minimalist architecture for a maximalist oppression

People die in Squid Game.
Lots and Lots of people (455 to be accurate).
In a nutshell, Squid Game has people murdered in spaces that basically look like kids’ playing fields but they just get creepier the more you look. Whether the game itself, the sets, or even watching the hitting Korean Drama—all are both tempting and intimidating. But while violence is one of the most appealing ingredients for the success (or failure) of a show, that’s not the only reason the series has become so popular worldwide. Pop culture, mesmerizing scenarios, and a plot full of social metaphors all contribute to this making the show officially the most watched show on Netflix to date with over 110 million views in less than a month.

The South Korean series by director Hwang Dong-hyuk tells the story of a group of 456 debt-laden adults who are all invited to participate in a series of six children’s games for the chance to win a cash prize of 45.6 billion South Korean Wons ($38 million USD).
Sounds simple, but there’s a sinister twist, of course: Every loser dies.
As a curious design enthusiasts, I was eager to discover more.
Thankfully, Netflix released a behind-the-scenes detailing some of the visual choices made by Hwang and art director Chae Kyung-sun. (Scroll down for the link)

“We created the places and displays trying to make the viewers think about the hidden intentions of Squid Game with us.”

The first game to start off the competition was chosen because of its inherent simplicity, according to Hwang: “Red light, green light is a kind of game that can be played by a lot of people at the same time. It’s also one of the most simple games.” In this case, a blue screen was built around the entire set to depict a large cornfield. The real showstopper, though, is the large-scale working robot, inspired by children’s textbook illustrations.

The second game,Honeycombs, takes place in a playground, where players are forced to play the Honeycomb Game. To bring back the feeling of being too small besides everything when we were kids, the playground and its elements including slides and wings were outsized—giant even for adults. According to the show’s Director, when we were young, the playground seemed very big, so they built a giant playground for adults. Moreover, the surrounding walls look like they are painted by children to ease the players from their original reality into the creepier world of Squid Game.

The third game, tug of war, features the same warped sense of scale. “I tried to simulate the atmosphere of real playgrounds,” Hwang explains. He felt it was important for the actors to feel as if they were really playing the game in order for them to adequately convey the life-or-death stakes. But safety first, of course: While the skinny platforms appear to hover over a dizzying black abyss, the actors were placed on ones that floated just above the ground.

The most devastating game to watch is the fourth game, marbles, in which the players split up into pairs of their choosing and are given 10 marbles each. Whoever ends up with all 20 marbles lives to see another game.

This set—the most realistic—was influenced by typical South Korean homes and alleyways from the 1970s and ’80s, which created a sense of nostalgia for the characters. It took the most work—through it, the art director wanted to convey “the coexistence of life and death, fiction and reality”. A lot of small details were put into the film set to create a sense of really being in the 1970s to confuse the players. Besides the fake sunset, other details were added including the window sills, the glass panels of the windows, the lighting on the front porches, and even the milk baskets. They went too far and planted weeds beneath walls themselves!

An orange glow of a sunset indicates that time is of the essence here before the games—and the characters—expire. Interestingly, achieving that glow was one of the most challenging visual feats to achieve, according to Chae. “We put the most effort into that set. It also took the most time,” she says. “Our main concern was how to display the sunset. We thought it should also be a set on the border of fake and real.”

In the fifth game, players are forced to cross a bridge walking on glass panels, with only half of the panels being tempered. If a player steps on a non-tempered glass panel, they fall and die. The architecture in this set is designed to make this suicidal walk look like a theatrical performance in a circus—with the suspended bridge, flashing lights, VIP spectators, and everything. The art director wanted to “design a space that’s dangerous and scary; a space where you can think of life and death at once.”

The terror that you see in the characters’ faces wasn’t an act, as real glass and plexiglass were set up nearly five feet off the ground. “I think we could express the unnoticed rigidity and fear of the body,” Hwang says of the emotion on set. “It felt like really jumping off a high bridge. The game was real, and they felt real fear.”

The last game well was the show’s namesake: Squid Game. It takes place in an empty stadium with the outlines of a triangle, square, and small circles (the shapes that make up the game’s logo). This set is the simplest, so as to not draw the viewer’s attention away from the two final players and their personal quarrels with each other. “The first and last games are played in the same spot,” Chae points out. “We wanted the place itself to tell a story, questioning who will be the last one.”

“That’s the story of Squid Game we intended,” Hwang adds. “It seems that all that’s left for the participants is despair, fear, and sadness. But much like the outside world they were living in, they don’t lose humanity or hope for that humanity. So this story is like Pandora’s Box.”

Unlike all the previous sets full of details and color, the waiting lounge where players should wait before the third and fourth games is plain white, with no end or beginning on sight. They wanted to create a dreamlike space—a one when the players pass through, feel like they entered some kind of a different world. Chae Kyung-sun explained that were attempting to create some kind of uneasy feeling that comes from a white room, not knowing what will happen next. We wanted to create an unknown space.

The most eye-catching element of the set design is, however, the vertical hallway of the gigantic underground facility. A maze-like staircase in pastel shades of green, blue, and pink – clearly inspired by Ricardo Bofill’s La Muralla Roja (Spanish for The Red Wall) – is the backbone of the project, connecting environments on different levels and leading to all the minimalist and cavernous spaces.

Uncertainty makes labyrinths exciting. Unlike what many people understand as architecture, the primary function of these spaces is to confuse and disorient. This soft yet sterile structure with repeated elements confuses not only the viewer, but above all the players, who are forced to line up and ascend each step of the staircase as if it were the last.

SQUID GAME’S SURREAL ARCHITECTURE IS USED AS ANOTHER CHARACTER

Watch Behind the Scenes of Squid Game: a never-before-seen world of this magnitude: https://www.youtube.com/watch?v=8vac9r4WPQI 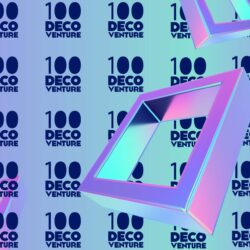 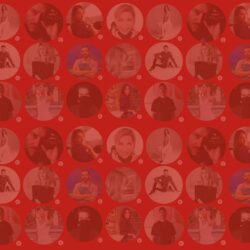 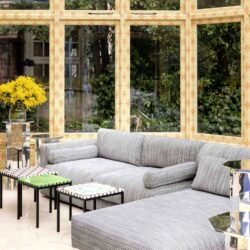 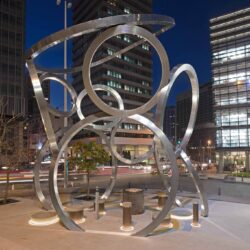